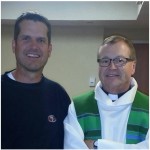 The results of concurrent investigations by his former employer, the Archdiocese of St. Paul and Minneapolis and Saint John’s Abbey have yet to be released, but that hasn’t stopped accused monk/priest Timothy Backous from updating his Facebook page to include a photo of himself and San Francisco 49er’s coach Jim Harbaugh. [ Link ]

Speaking of Harbaugh in 2013, player Donte Whitner said, “He said that we can do anything in the world and we can come and talk to him and he’ll forgive us except put our hands on women.” [ Link ]

One has to believe that Harbaugh would also include young boys in his exception list.