Br. Isaac Connolly, a monk at St. John’s Abbey in Collegeville, MN recently took down his Facebook page [ Link ] after it was featured in the new “Meet the Monks” section on the Behind the Pine Curtain web site ( http://www.behindthepinecurtain.com ). The Facebook account was public for over three months.

Connolly is currently “on restriction” at St. John’s Abbey. Br. Isaac Connolly was placed on restriction after allegations emerged that he fondled one or more victims and attempted to sodomize at least one victim. Restricted monks cannot have personal web sites. Abbot John Klassen, however, is known for his relaxed approach to the enforcement of the actual restrictions placed on monks at the Abbey.

The cached version (from February 20, 2010) of Connolly’s Facebook page is here: 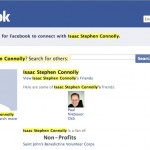 Fr. Tom Andert, another monk offender at St. John’s Abbey, does have a Facebook page. It should be noted, however, that Fr. Andert is not on restriction despite allegations of misconduct. Instead, Fr. Andert was promoted to the second highest office (Prior) at the Abbey.