This school, known as Escuela San Antonio Abad, opened in September 1950. It was a free school for one hundred boys of the region and offered academic courses and prevocational training in mechanics, carpentry, and agriculture.

The first two monks from Saint John’s, Fr. Basil Stegmann and Fr. Julian Simon, arrived in Puerto Rico on 1 July 1947, in response to a unique invitation to found a school for poor boys in the Humacao and Yabucoa districts. Already in 1939 a sugar planter in Humacao, Don Agripino Antonio Roig, felt the need to found a school for the education of poor boys in those districts. Eventually he engaged the interest of Bishop Davis of San Juan, who decided that the Benedictines would be successful in such a project. 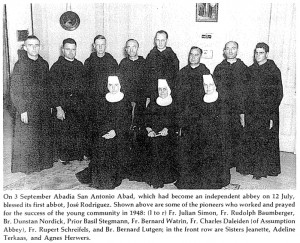 After preliminary exchanges and arousal of interest, Abbot Aleuin Deutsch and other chapter members journeyed to Puerto Rico, where they met Bishop Davis, Mr. Roig, and Fr. Juan Rivera Viera, pastor of Holy Name Parish in Humacao. Among the details worked out in this visit were the following: Roig would make a gift of ninety-two acres outside Humacao, would provide buildings, and would endow an agricultural and trade school. Bishop Davis invited the Benedictines to make a foundation and gave to a projected monastic foundation the parish of Holy Name in Humacao with its four mission stations.

With the conclusion of preliminary arrangements, Abbot Alcuin asked the monastic chapter at Saint Iohn’s on 27 February 1946 to establish a dependent priory in Humacao. The first two monks arrived on 1 July 1947. ln September three more monks were sent. In 1949 the first building was finished and a year later four sisters from the Convent of Saint Benedict arrived to round out the operation of a ten-room parish school, which had been built in connection with the Holy Name Parish.

This school, known as Escuela San Antonio Abad, opened in September 1950. It was a free school for one hundred boys of the region and offered academic courses and prevocational training in mechanics, carpentry, and agriculture. All students entered on scholarships established by Mr. Roig and other Puerto Ricans interested in the first and only Catholic trade school on the island. The school continues to be the most prominent activity of the community of San Antonio and at present has an enrollment of slightly over three hundred. The focus of the school has moved away from the vocational to the college preparatory curriculum.

Approval from the Holy See for independence is assumed and a date has been set for 1984 for the election of the monastic superior.

The Abbey of San Antonio Abad was founded in 1947 when two monks arrived from Saint John’s on 1 July to begin their mission work (see October 1983 Quarterly). Fr. Basil Stegmann came as prior and at the same time as pastor of the parish of Humacao. Fr. Julian Simon, who is the only living member of the founding group and still active in Humacao, was Father Basil’s assistant. Over the next thirty-seven years Abadia San Antonio Abad and its apostolates have passed through various phases of development. The school went from an agricultural-industrial program (1950) to a college preparatory for boys (1958) to a coeducational college preparatory (1971), which is its current status.

The new abbey’s pastoral-parochial apostolate began in Humacao when the Benedictines first arrived. Today, after continuous growth and expansion, its pastoral concerns are all concentrated in Humacao. Six priests, including a Spanish monk from the Abbey of Lazcano, minister to its 48,000 inhabitants and “cover” also the twelve chapels and numerous communities within the parish limits. From 1957 to 1983 the Benedictines were also in charge of the neighboring parish of Yabucoa with its nineteen chapels. Lack of personnel, however, forced the decision to turn the parish over to the bishop and his diocesan priests on 1 July 1983.

Along with Abbot Jose, the following are members of the new Abbey, in the order of their monastic profession: Sergio Martinez, Owen Tekippe, Bernard Watrin, Julian Simon, Eric Buermann, Mauro Simpson, Felix Neussendorfer, Tarcisio Medina, Jaime Reyes, Gregorio Valentin, Oscar Rivera, Rafael Perez, Cruz Andino, Randolph Perkins, Eduardo Torrellas (to be ordained a deacon in August), Florencio Torres, Anastacio Torres, and Francisco Moreno. At present the community has no novices, but one candidate, Jose Marrero, who will possibly enter the novitiate In November.