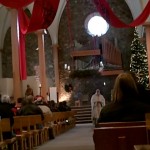 Thank you to the parishioner who provided the video of Father Jerome Tupa’s message to those attending the 10:00am mass at the Church of Saint Joseph on Sunday, January 13, 2013.

I want to begin by addressing a letter that many of you received this, uh, past week from a Mr. Marker. I want you to know that there are things in there that are, are, uh, known and did take place, however, the majority of the letter is filled with innuendo and simply libelous puff. I am going to address this in the, more completely in the next bulletin. Now then, let’s get on to the real business at hand. The real business, of course is baptism!