How will the school handle the matter? The school’s handbook is clear with regard to students, but not faculty. According to the Prep handbook, a student who violates the school’s substance policy “in an egregious manner in frequency or severity … may be suspended or dismissed.”

The real question is… how will Abbot John Klassen, head of the Prep School [ View] , handle the matter?

If handled in the same way Klassen has handled other matters involving alcohol and other misconduct, Reichert could be up for a promotion.

Reichert is the second current Prep School administrator who has had public issues with alcohol. Three recent Prep School headmasters have been accused of other misconduct.

Despite past, credible allegations of alcohol abuse and inappropriate conduct with a minor [ View ], Father Jonathan Licari, OSB was named Prep School Headmaster in April of 2013. In October of 2013, Licari was also exposed for his role in the coverup of abuse by Father Dominic Keller [ View ].  Father Licari is still headmaster and is Reichert’s boss.

In June of 2014, a newspaper [ View ] reported allegations of misconduct by Father Timothy “Timo” Backous, OSB. Father Backous stepped down from his role as Prep School Headmaster in 2013. After the news article appeared, another witness to misconduct (involving a different child) Backous came forward. The results of the investigation into misconduct by Father Backous, like other Abbey members [ View ], have yet to be released.

Former Prep School Headmaster Father Tom Andert, OSB was publicly accused of misconduct in 2007 [ View ]. Father Andert’s love letters to that same Prep School student were made public in 2010 [ View ]. According to the abbey’s web site [ View ], Father Tom Andert is prior (second in command under Abbot John Klassen) at Saint John’s Abbey, a position he has held since 2007. 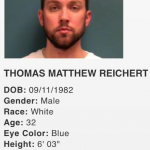 It will be interesting to see how Abbot Klassen handles the Reichert matter.