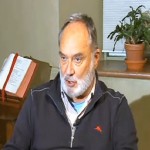 News of the theft – and Father Jerome Tupa’s wish for a Christmas miracle – broke on the morning of December 9, the same day that Saint John’s Abbey released the names of eighteen monks likely to have offended against minors.

Six of the eighteen offending monks worked at the Church of St. Joseph. Tupa [ More ] is a monk from Saint John’s Abbey.

The missing figurine story was covered by several local media outlets, and is still available on the St. Cloud Times and WCCO web sites.

The pieces were allegedly stolen overnight on November 27, December 3 and December 5.

The missing pieces were valued at approximately $2000.

On December 10, several media outlets (including St. Cloud Times, Star Tribune, BringMeTheNews.com and KNSI) reported that the figures had been returned.

Father Tupa told the StarTribune: “They all came back. I have a feeling it was a prank by some young kids and they realized: ‘Uh-oh, we could really be in some trouble.'”

On December 10, Father Tupa told KNSI that all but the cow had been returned “during the night.”

However, according to a police report [ View as PDF ], Father Tupa did not contact the police regarding the returned pieces until December 14, 2013, days after the thieves were reportedly identified as students from nearby College of Saint Benedict (“CSB”).

When he did contact the police, Father Tupa reported that he wanted “no charges filed because property was returned.”

According to the police report, the nativity figures were taken by “guilty students.”

According to the police report, “College of Saint Benedict will be handling the discipline of the guilty students.”

Saint Joseph Police Department Spokesperson MaryBeth Munden wrote (via email on December 20th) that the names of the “guilty students” are known but are not included in the police report. She confirmed that the students’ names were not checked against any criminal databases.

“Since charges were not pursued,” Munden wrote, “names were not entered into any reports,” and, “In this particular case, reports were not forwarded to the County Attorney.”

According to police reports, three wise men (value $600) were reported missing on December 4, 2013.

According to police and media reports, seven more figures (Mary, Joseph and some of the large animals, value $1400) were reported missing on December 6th, leaving an angel and one or two sheep.