Saint John’s Abbey quietly admitted, via a revamped web site in the summer of 2012, that at least 23 members of its community had been credibly accused of sexual abuse or misconduct.

“rigorous investigations deemed that allegations of sexual abuse or misconduct* against 23 members of the Abbey were credible.” 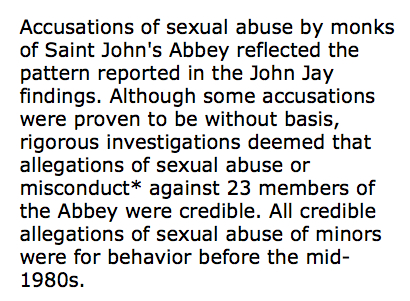 Interestingly, on the web page (formerly entitled “transparency.html” by the way) the abbey fails to provide the names of the 23 monk offenders.

The reference to “23 members” on the abbey’s web site has been removed.

The abbey web site also no longer provides a copy of the letter that it claims was sent to all Saint John’s alum in April of 2011.  As part of the April, 2011 settlement, that letter was to be posted on the abbey’s web site [ View ].

Which of the following credibly accused monks [ View ] make up the other five on the abbey’s new list of twenty-three?