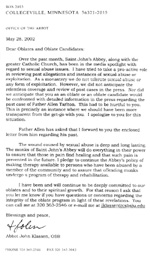 Note: The following letter was written by Abbot John Klassen, in support of Father Allen Tarlton and a letter Tarlton wrote to the members of the Oblates program. Abbot Klassen knew, when he wrote his letter, that Father Tarlton had more than one victim. In fact, at the time this letter was written, Tarlton was known to have had acted inappropriately with at least six university and prep school students. That number is now over a dozen. The abbey has settled complaints with several of Tarlton’s victims. The abbot also knew that other claims made in Tarlton’s letter were inaccurate.

OFFICE OF THE ABBOT
May 28, 2002
Dear Oblates and Oblate Candidates:

Over the past month, Saint John’s Abbey, along with the greater Catholic Church, has been in the media spotlight with regard to sexual abuse issues. I have tried to take a pro-active role in reviewing past allegations and instances of sexual abuse or exploitation. As a monastery we do not tolerate sexual abuse or any form of exploitation. However, we did not anticipate the relentless coverage and review of past cases in the press. Nor did we anticipate that you as an oblate or an oblate candidate would be confronted with detailed information in the press regarding the past case of Father Allen Tarlton. This had to be hurtful to you. This is precisely an instance where we should have been more transparent from the get-go with you. I apologize to you for this situation.

Father Allen has asked that I forward to you the enclosed letter from him regarding his past.

The wound caused by sexual abuse is deep and long lasting. The monks of Saint John’s Abbey will do everything in their power to ensure that those in pain find healing and that such pain is prevented in the future. I pledge to continue the Abbeys policy of making therapy available to persons who have been abused by a member of the community and to assure that offending monks undergo a program of therapy and rehabilitation.

I have been and will continue to be deeply committed to our oblates and to their spiritual growth. For that reason I ask that you let me know if you have questions or concerns regarding the integrity of the oblate program in light of these revelations. You can call me at 320 363-2546 or email me at jklassen@csbsju.edu