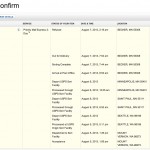 On August 7, 2013, an express delivery to Gina Gagliardi-Benson was refused. The letter [ View ] requested that Ms. Gagliardi-Benson provide, by 5pm on August 12, 2013 (today) a copy of the restraining order she claimed was in effect on July 3, 2013 (see below).

On the evening of August 7, 2013, a similar message was sent via Facebook. An excerpt:

Gina, I am requesting, by August 12, 2013 at 5pm, a copy of the restraining order that you claimed was in effect on July 3, 2013. This is my final message to you unless you request an honest, non-threatening exchange. I have proven, time and time again, that I am willing to have such exchanges.

You have no idea what you are talking about. My childhood friends have been molested I have feelings about the victims. Tarleton doesnt deserve to be a monk …. Agreed. But Pat Marker is a lunatic. He’s as eveil as Tarleton and the high school has to keep him away.

I have a clear mind and a restraining order because he had tormented my family. My children have nothing to do with all this. He’s victimizing them simply to get attention. It won’t work as my father has 60 years of players that can tell you what a wonderfully kind man he is. You need a clear mind. Have you considered for one minute that a victim (Marker) may be off balanced and dangerous? Because he is. My children’s lives are in jeopardy because he is in fact crazy. A victim? Yes. But now he is crazy and does need to be escorted off of our high school campus as we all fear him. He was in my brothers class. Came to our house as a high school student and was off even then. Often victims are chosen because they are not mentally stable. I stopped feeling sorry for him years ago when I heard how many people he had tormented.

Between 1981 and 1983, Marker visited the Gagliardi home in Collegeville on several occasions. Jim Gagliardi and Marker played the Intellivision baseball video game. Marker does not recall seeing Ms. Gagliardi-Benson at the house.

On November 11, 2011, Ms. Gagliardi-Benson berated Marker during a Facebook chat session during which she called the Marker “evil”, said she had “never been madder in all my life”, and made other inflammatory remarks about Marker. She also claimed that two of her childhood friends lied about sexual abuse by Father Richard Eckroth. She also claimed that she told Abbot John Klassen about the “lies”.