On Sunday, January 24, 2016, Father Dan Ward gave a presentation (via Skype) to an audience of 50-75 people on the campus of Saint John’s University in Collegeville, Minnesota.

One of Father Ward’s alleged victims attended. Father Ward admitted to the audience that he met with the alleged victim in the vice-president’s office [at the College St. Benedict] years ago, but he didn’t want to have a discussion about something that “was settled.”

Note: In October of 2012, Saint John’s Abbey confirmed that Father Dan Ward was under investigation for sexual misconduct. The public has yet to learn the results of that investigation, though Father Ward resigned from as Executive Director of the RCRI in May of 2013. Father Ward taught at St. John’s Prep School and St. John’s University. 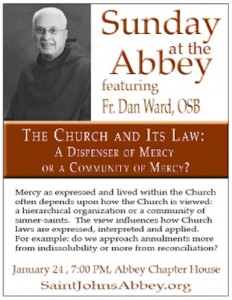 Abbot John Klassen hosted the event which was advertised in the January 15, 2016 edition of The Visitor, the official newspaper of the Diocese of Saint Cloud, Minnesota.

The first person to the microphone asked if Father Ward had ever crossed student-teacher boundary lines with any students from St. John’s Prep School or St. John’s University, or with any novice monks.

She also asked about the Mock Trial program and Joshua Guimond.

Father Dan Ward responded immediately that he was in the Bahamas when Guimond was at St. John’s.

While Abbot Klassen allowed Father Ward to answer questions about allegations of sexual misconduct (of which there are many) Abbot Klassen took the microphone after Joshua Guimond’s name come up.

The third person to the microphone was one of Father Dan Ward’s alleged victims.  Her allegations are available in a redacted notarized pdf document on this web site.

Father Ward had earlier stated that he had never crossed any boundaries, so it came as a shock to some in the room that Father Ward remembered his alleged victim’s name but recalled for the audience a meeting with his alleged victim in the vice-president’s office at St. Ben’s where the matted was “settled.” Father Ward did, however, dispute that he ever said, “I ask for forgiveness” from the woman during the meeting.

She offered Father Ward an opportunity to say he was sorry. He did not accept her offer.

A transcript of the exchanges is available below.

Father Dan Ward: So I’d like to leave you with these two quotes: One from Ryan Stevenson, again, “Each of us is more than the worst thing we’ve ever done,” and we must apply that to each person however we judge them as we shouldn’t judge them. And Pope Francis says, “Mercy is the force that reawakens us to new life and instills in us the courage to look to the future with hope.” Mercy, acceptance, and forgiveness of persons, in church law, in church ministry, is about giving hope for people on the journey of life.”

John Klassen: Dan, thank you so much for a wonderful, thought-provoking presentation that I think helps all of us understand the shift we’re seeing in Pope Francis. So, we’re going to open this directly up into questions here and observations and requests for clarification. So, please, the floor is open uh if you’d come up and use the mic, that would be very, very helpful.

Female Q1: Thank you for taking my questions…

Ward: Can you just speak up a little closer to the mic?

Female Q1: Sure. Sorry about that.

Female Q1: Can you please explain further about the canon and civil laws regarding student-teacher boundaries and have you ever crossed these lines with any Prep students, university students or novice monks.

Female Q1: Please explain further between the canon and civil laws regarding student-teacher boundaries and have you ever crossed these lines with any Prep, university students or novice monks.

Ward: Uh, the last part of the question is no, uh, I don’t know the difference with, uh, civil and canon law because, um, both of them, there’s a difference between boundary issues, and uh, criminal, what you want to call, criminal issues. Boundary issues are dealing with social/psychological relationships and criminal, criminal law is dealing with specific acts but I don’t understand all of the question.

Female Q1: OK, the like the student teacher boundaries of inappropriate relationships… I do have three affidavits of victims from you and that have said that you were sexually inappropriate with them in the past and I would like to know if you have a response for that.

Female Q1: OK. Sir. Do you teach political science and have you even been involved with mock trial?

Ward: Never heard of the person.

Female Q1: No, Mock trial, is where lawyers who are studying to be lawyers argue and have…

Female Q1: So you have been involved with mock trial?

Female Q1: OK. Because Josh Guimond went missing and he was co-captain of the mock trial and he did..

[Abbot Klassen heard interrupting: I don’t think this is the issue… time… ]

Ward: I was in the Bahamas

Female Q3: I don’t know if you remember me. I was one of your students in Constitutional Law. I just wanted to ask a question. You said “In doubt, you must always favor the person who is being accused.” Why do you feel that is necessary? I mean, if they are accused, isn’t there some sort of validity behind the accusation? Otherwise, they’d be innocent.

Ward: Well, it’s both the principal of canon law and its an ancient principal of roman law [Latin Phrase] and we do it in civil law too because in civil law and in criminal law it has to be beyond a reasonable doubt before someone can be convicted. And so the same principal holds in canon law that it has to be beyond a reasonable doubt so that accusations may or may not be true but the whole purpose of the legal system is through that legal system, to find out the truth. To give you an example, this is not civil and criminal law, but I was teaching a course in the seminary on marriage annulments, I, the students, they were all deacons, they would come and I would hear a case with them. In one case the person listened to the woman who was giving it and then the man wanted to give testimony and so I said to the seminarian, “You go down to Minneapolis to get the testimony.” And he came back and he said, “that woman is lying.” And I said, “Well the man said this…” and I said, “Well, that’s… you’re going to find out that in marriage, it’s usually somewhere in the middle. But you end up with a system of law is designed not what is canon law, civil law, european law, continental law, common law, is that no body is guilty of something until they, it’s been proven. And in the United States system we use “beyond a reasonable doubt.” In the church we use the phrase “moral certitude” so that’s how the system is developed. Accusations aren’t truth. Accusations are accusations.

Ward: I don’t remember this.

Female Q3: You said we are all broken and we are all human. So, do you want my forgiveness?

Ward: Well, actually. Is this XXXXXXX, I didn’t hear your name.

Ward: Yeah, Well, if you remember, I did not say, “I ask for forgiveness.” I said, if there’s some way, because, you said you weren’t part of my groupies, I’m sorry. But I am not here to have a discussion about something that we, that was settled before in the vice-president’s office.

Female Q3: It wasn’t settled. I left and threw up after you tried to touch me.

Female Q3: OK. Well, Dan, This was my one opportunity to ask you to say your sorry.