Regarding The Hunt, Sanner and Wetterling

A few minutes into the program, and the first time we hear her voice, Patty Wetterling asks, “What was going on… in this region? What was going on, and it was so deeply and intensely harmful… to boys?”

There are certainly some similarities between the Paynesville cases examined on “The Hunt” and Jared’s and Jacob’s case. Joy Baker (with the help of many people behind the scenes) has done a fantastic job in bringing some information to light [ View ].

As for what was going on in the region…

By 1989, over 200 incidents of misconduct had been perpetrated by monks from nearby Saint John’s Abbey. While the abbey has admitted to at least two dozen perpetrators, the number much higher [ View ]. The earliest publicly reported abuse occurred in the 1930s and between 1955 and 2003, the monks preyed on students without consequence.

Much of the abuse occurred in St. Joseph. Much of the abuse was perpetrated by clergy stationed in St. Joseph [ View ]. In an effort to protect his monastic brothers, the current priest in St. Joseph, Father Jerome Tupa, a noted artist and part-time pornographer [ View and View ], has bullied [ View ] and lied to his parishioners [ View]. Tupa is the most current of a long line of priests from Saint John’s who have failed to serve the best interests of the families in Saint Joseph [ View ].

The CNN program failed to mention the documented history and high concentration of pedophiles living minutes away at Saint John’s Abbey in Collegeville. When looking at the “region” this angle must be explored… if not for suspects, then for the role that the institution had in creating a county-wide hotbed for acts of sexual abuse and other deviant behavior without consequence,  aided by a law enforcement community which has protected the Abbey for far too long.

Stearns County Sheriff John Sanner was interviewed in his office. He had time to clean and organize his office in order to make it camera ready. No family photos. Just a couple of plants, a small trophy and a Saint John’s University football helmet, autographed by legendary coach John Gagliardi who, by his own admission, knew of abuse at Saint John’s for several decades. [ View ] 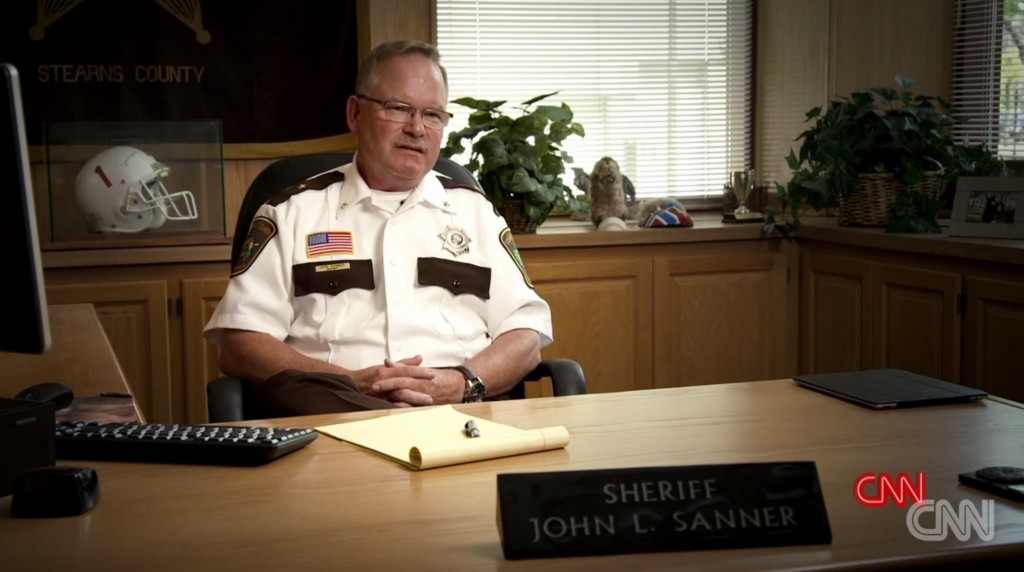 According to Sanner’s LinkedIn profile, he graduated from Saint John’s University in 1984. From 1980 to 1984, at least 27 individuals were victimized by members of the Saint John’s Abbey community.