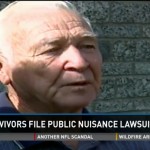 Two of those plaintiffs, John and Al Vogel, became victims in the early 1970’s, and were part of a lawsuit that was settled in 2002. At the time their attorney, Jeff Anderson, and their father, Raymond, celebrated the settlement.

“It helps me a great deal, the factor, the safety for the children,” Raymond Vogel told KARE in 2002. Vogel, who has since died, worked at St. John’s Abbey for 40 years and knew the priests his son’s accused.

But 12 years later John and Al Vogel were once again standing before the camera in the St. Paul law offices of Attorney Jeff Anderson, saying St. John’s and the Diocese weren’t taking all the steps necessary to reign in credibly accused violators.

Al said promises were made in the 2002 settlement weren’t being taken seriously the Abbey and the Diocese.

“They told us they were going to take care of the family and do what’s right. That has not happened at all,” Al Vogel asserted.

The priests who abused the Vogel brothers. Richard Eckroth and Cosmas Dahlheimer are no longer threats to anyone.

Father Richard Eckroth has advanced dementia and is in a nursing home, according to a spokesperson for St.John’s Abbey. Father Cosmas Dahlheimer is now dead.

But Anderson’s public nuisance lawsuit claims that other credibly accused clergy need to be on a shorter leash. He gave the example of Father James Thoennes, who is on the Diocese’ list of credibly accused priests and works part-time for the Diocese.

In a Sept. 9 deposition, taken as part of a different sexual abuse case, Thoennes said he must get permission from the Diocese if he leaves the St.Cloud metro area, but he can travel freely inside the area without seeking permission from superiors.

“I can go to St. Joe and St. Johns,” he said during excerpt of the videotaped deposition shared with reporters at Anderson’s press conference.

“We constantly taking care in observing that he follows all of these, that he’s not in contact with any, any young people,” Kettler said to the newspaper’s board.

Mike Bryant, the attorney who conducted the Thoennes’ deposition, said that’s too long of a leash for someone who admitted improper sexual contact with minors during the same deposition.

The Diocese of St. Cloud issued said that Thoennes meets quarterly with a review panel that reviews his activities and readjusts his restrictions when necessary.

“Thoennes does not have faculties to serve publicly as a priest and currently lives in St. Cloud under restrictions,” the statement from the Diocese read.

“He is not allowed to have contact with minors unless another adult is present. He must receive permission to travel outside the immediate St. Cloud area.”

The statement went on to say Bishop Kettler is committed to transparency and bringing healing to victims of clergy abuse.

The Abbey issued statement, which read, in part, “It is especially dismaying that today’s news conference was promoted with the claim that these incidents are evidence of a ‘clear and present danger.’ That claim is absurd and represents fear-mongering at its worst.”