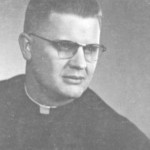 In January of 2014, Bishop Donald Kettler released the names of 33 clergy from the Diocese of Saint Cloud “who were likely involved in the sexual abuse of minors.”

Yzermans taught at the Prep School in the mid-1970s.

According to Kettler’s 2014 statement, Msgr. Yzermanns served in the following locations:

The list of locations did not include Collegeville, where Yzermans reportedly taught during the 1974-1975 school year.