Accused Perpetrator is monk-in-charge at Abbey 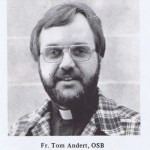 Accused perpetrator Father Thomas Andert, O.S.B., will be the “monk-in-charge” at Saint John’s Abbey in Collegeville, Minnesota later this week while Abbot John Klassen travels to Rome to present Pope Francis with the final volume of the Saint John’s Bible.

Abbot John Klassen appointed Father Tom Andert prior in 2007, despite Klassen’s knowledge of credible allegations of misconduct by Father Andert.  In Klassen’s absence, Father Andert is in charge.

According to a June 15, 2007 press release, “When the abbot is away from the monastery the prior assumes the abbot’s leadership role.”

“Abbot Timothy met with me … I was asked to provide my observations about Andert’s inappropriate closeness with [Victim].  It was enough information to make the abbot force Tom to fully leave the Prep School.” – September 30, 2007 email

By January of 1994, the search was on after Abbot Timothy Kelly announced that Father Tom Andert was out as headmaster at St. John’s Preparatory School.

Despite multiple reports of misconduct by Father Tom Andert, Abbot Klassen has refused to remove Father Andert as prior or start an investigation into his misconduct.

Abbot Klassen has, however, initiated investigations into misconduct by at least three other monks: