Sisters Ask Abbey for Information on Priest Accused of Abuse

The sisters of a former St. John’s University student asked St. John’s Abbey today to confirm that a visiting professor sexually abused their brother in 1970.

Rita Prince and Teri Ryan were at the Abbey today to ask Abbot John Klassen to publicly acknowledge that the Rev. Paul A. GoPaul abused their brother, Patrick Ryan. They also wanted to see a letter their father had written to St. John’s in 1970 that detailed the reasons Patrick Ryan wasn’t returning to St. John’s after a little more than one year of schooling.

GoPaul drugged and raped Patrick Ryan, the sisters said. After dropping out of college, Ryan returned home to California a changed person, they said. He spent time in a mental health facility, escaped and hanged himself in a California jail in 1971. 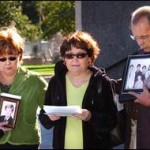 Times photo by Jason Wachter, jwachter@stcloudtimes.com Teri Ryan (left) and her sister Rita Prince (center) talk about their brother, Patrick Ryan, who was a former St. John’s University student, with support from Bob Schwiderski from SNAP, (right) today at the Abbey Church.

“It did happen 35 years ago, but the pain is as if it was yesterday,” Prince said of the abuse against her brother.

Klassen is out of the country until later this week. Abbey spokesman the Rev. William Skudlarek met Prince and Ryan at the Abbey Church today and expressed sympathy for the sisters’ sorrow. The first the Abbey had heard about allegations against GoPaul was in 2002, he said.

The allegation was sent to an Abbey member in the monastery, who contacted GoPaul’s superior at the Society of St. Edmund in Vermont, Skudlarek said. GoPaul was a member of that society and is listed in their records as having died in 1988.

Skudlarek vowed to work with Ryan and Prince to investigate what happened to Patrick Ryan while he was in Collegeville. But, he said, because GoPaul was a visiting professor, responsibility for his supervision rests with the Society of St. Edmund and the university. GoPaul didn’t live in the monastery and wasn’t a member of the Order of St. Benedict.