The LCWR and Rev. Dan Ward

According to the LCWR’s April 2012 newsletter, there has been a “precipitous decline in the number of religious.”

According to the LCWR’s April newsletter:

“… Janice Bader, CPPS, executive director of the National Religious Retirement Office (NRRO), and Dan Ward, OSB, executive director of RCRI, attended the joint meeting and shared current data on religious institutes in the United States. The data show a precipitous decline in the number of religious in compensated ministry, an increase in the average age of those serving in leadership, the number of institutes that will run out of funds within the next five to 10 years, and the growing complexity of the decisions that institutes are now facing. Both NRRO and RCRI are looking at options for what US religious life may need to do in order to have a viable future and are exploring how religious may help define what the next chapter of religious life may look like.”

Rev Dan Ward, OSB is executive director of the Resource Center for Religious Institutes (“RCRI”). He should have no involvement in “defining what the next chapter of religious life may look like.”

RCRI shares a building on Cameron Street in Silver Spring, Maryland, with the Leadership Conference of Women Religious (LCWR), the Conference of Major Superiors of Men (CMSM) and the Religious Formation Conference (“RFC”). 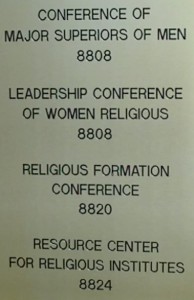 How big is RCRI’s reach?

CMSM serves the leadership of the Catholic orders and congregations of the more than 17,000 vowed religious priests and brothers of the United States. [ Source: http://www.cmsm.org/index.shtml ]

RFC serves Roman Catholic institutes of women and men religious with programs and services for those in the ministry of initial and life-long formation. [ Source: http://www.relforcon.org/joomla/about-us/about-rfc ]

According to a 2008 press release:

The members of the Conference of Major Superiors of Men (CMSM) and the Leadership Conference of Women Religious (LCWR), represent more than 86,000 of the country’s Catholic sisters, brothers, and religious priests. [ View ]

According to the RCRI web site [ View ], one staff member (“Bobbi”) takes care of the business needs all the four organizations that make up “Cameron 4”: RCRI, CMSM, LCWR, and RFC.

Rev. Dan Ward is RCRI’s executive director. He is also an outcast monk from Saint John’s Abbey in Collegeville, Minnesota.

At least four men have come forward with allegations of misconduct [ View ] by Rev. Dan Ward.

Dozens, if not hundreds — and possibly even thousands of victims of sexual misconduct –have been affected by Rev. Dan Ward’s own misconduct and those other actions taken by him under the cloak of canon law and the “preservation” and “good” of the Church.

The Rev. Dan Ward is not part of the solution.

Rev. Dan Ward has been, and continues to be, the very personification of the problem within religious communities. Misconduct and deception will not solve this problem.

The first step in dealing with the problem should seem apparent.

As the LCWR Assembly meets this week in Saint Louis (Tuesday, August 7, 2012 to Saturday, August 11, 2012) the LCWR leadership should distance itself from perpetrators like Rev. Dan Ward.