The Lost Book: Behind the Pine Curtain 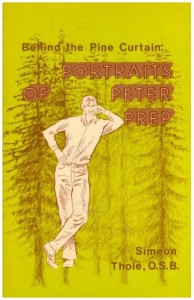 And there in the dark, the sea of loneliness, isolation, and alienation that had been damned up for years broke upon him, and he tossed and panted and cried and nearly drowned in sorrow. Was there no friend? Was there no one who knew him? For the tenth time he tossed and twisted in his agony. He turned over onto his right side and huddled down under the sheet away from the fear. His had slipped beneath the elastic band of his shorts, and the turmoil subsided. There was someone that night who loved him. (Page 96)

“It was at those times that [Brother] Ernest admired [student] Bruce the most, and he only feigned work himself while he watched the sandy-headed, lanky youngster check his list, raise the pen to his mouth, roll it around in his lips during a moment of thought, and then carefully enter another name on his sheets. The quiet, the grace, the thought, the intensity of concentration never ceased to excite Ernest about any student, but since it was Bruce there before him, these feelings were fused with a strong sentiment allied to pride of paternity.” (Page 37)

According to Amazon.com: “A series of pen portraits examines the personalities of several members of the faculty and student body of St. Peter’s Prep involved in two related incidents.”