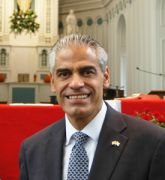 Miguel Diaz, currently listed as a professor at Saint John’s School of Theology (SOT) was found to have likely engaged in “unwelcome conduct of a sexual nature” toward a married couple” and is “moving from one Roman Catholic university to another after an investigation found it likely that he sexually harassed a married couple where he now works.” [ View ]

Father Anthony Ruff, another SOT faculty member, received treatment at St. Luke’s nearly a decade ago [ View ].
According to the Saint John’s School of Theology (SOT) web site [ View ], Diaz is still a professor at the Saint John’s:

In 2009, MaryAnn Baenninger, president of the College of Saint Benedict said:

“The College of Saint Benedict is enormously proud that Miguel has been named to this important post. Miguel is a highly-respected theologian and scholar, and an excellent teacher. Most importantly, he has a deep commitment to Catholic social justice and to inclusiveness in the Catholic Church. He truly lives a life of faith. He is ideal for this post.”  [ View ]