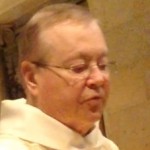 According to Sister Jeanne Weber, chair of the Mount Marty College Board of Directors, Fr. Timothy Backous from St. John’s Abbey in Collegeville, Minnesota is no longer being considered for the position as the new president of Mount Marty College in Yankton, South Dakota. Backous was considered the front-runner and had reportedly told staff members at Saint John’s Prep School that the job was his.

Instead of an expected announcement of a new president of Mount Marty College, officials have instead announced they are extending the interviewing process.

“There were several applications that came in a little later — not beyond the deadline because we didn’t actually have a deadline — and the search committee determined that we would take a look at additional people,” said interim president Carrol Krause. “We had narrowed the field down to three of the early applicants and they actually did interview with the board. However, the board did not make the decision to hire one of them.”

According to Sister Jeanne Weber, chair of the Mount Marty College Board of Directors the three are no longer being considered for the position.

“We are moving on,” she said. “We are continuing the interviewing process. We still have a number of very qualified candidates that we can consider, who are still willing to be considered for the position.”

“It certainly is not starting over,” he said. “I am anticipating, with the Christmas holidays before us, it is unlikely that we will have people in before the holidays. We are looking at having interviews in January, and hopeful that we will have a decision by mid-February. We have had some very good candidates and I am very optimistic that I will work my way out of a job.”

The position at Mount Marty came open in April when Dr. James Barry resigned as president.

Initially, it was reported that 57 applications had been received for the position, which was more than the search committee had expected. The original three finalists were interviewed in November.

“We are still very hopeful that we will find the best person possible for the position,” Weber said. “The search will take a little bit longer as we search a bit wider than we had planned on. We are still optimistic about finding a qualified candidate for the presidency.”