Matti Feeney knows kids. For the past four years he has been a CYC camp counselor and has gained an invaluable education…. He tells his campers that he’ll answer any question they throw at him. In five years, Feeney says he’s answered every one. The youth director has handled every kind of topic— “God, heaven, hell, sex — you name it.”

You can use most any measure,
when speaking of success.
You can measure it in
fancy home, expensive car or dress.
But the measure of your real success is one you cannot spend.
It’s the way your kids describe you when they’re talking to a friend.

Matti Feeney seems to live his life by this poem, one of his favorites. Feeney, a St. John’s University student, recently became the director of youth ministry in the St. Joseph parish.

Feeney, an English and secondary education major, is working full time as the youth ministry director. He has rearranged his class schedule and pared it down to eight credits per semester in order to fulfill the requirements of this demanding job.

The director of youth ministry job is a more than full-time position. Feeney puts in many more hours with his kids than he is actually paid for. They stop by his house after school, for some of the candy he conveniently keeps his fish tank filled with. He eats lunch with the fourth and fifth graders every day at 11:30.

“Many of them don’t have a male role model,” he said.

Every Friday night ten to twelve youngsters show up at his house to watch movies. Feeney even takes some of them out to the theaters, about once a week. 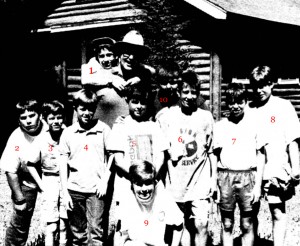 “You have to enjoy your job—you have to want to do it, and like doing it,” Feeney said.

Feeney started working with young people when he was in high school by teaching religion classes. From there he became a CYC camp counselor. Last year, he got involved in the St. John’s Knights of Columbus Youth Ministry program.

Being Director of Youth Ministry is a very demanding job. Feeney is in charge of finding teachers and books for religious education classes, creating lesson plans, helping with student registration, assigning classes, and organizing teacher training, workshops, and retreats. His pet project is working with the various youth groups in the parish.

The youth groups have grown since Feeney became the director of the program.

“Last year there were only four to six members in the High School Youth Group,” Feeney said.

A Youth Support Team was started in the parish and now has 85 volunteers. This, in an area where Feeney was told he’d find no interest.

The Youth Support Team works in seven areas of youth needs, from prayer groups and chaperoning, to teaching. This support in the adult community has transferred itself into enthusiasm on the part of the students in the community. Seventeen students showed up for the last Youth Group meeting.

Feeney said that he’s learned the importance of letting the young people do the work. They have voted on several activities for the year already, including a lock-in planned for sometime in November, and a Christmas Sock Hop dance.

“Last year the school wouldn’t let the kids hold a dance, because of scuff marks from their shoes [on the gym floor],” Feeney said. “I said, ‘what about a sock hop?'”

Matti Feeney knows kids. For the past four years he has been a CYC camp counselor and has gained an invaluable education.

“Kids are the same everywhere,” Feeney said. “They appreciate frank talk. If you’re open to them, they talk to you.”

As a camp counselor, Feeney has become quite notorious. He tells his campers that he’ll answer any question they throw at him. In five years, Feeney says he’s answered every one. The youth director has handled every kind of topic—”God, heaven, hell, sex—you name it.”

Matthew means “gift of God.” And Matti Feeney certainly is a gift to his children. He obviously cares deeply for them—he spends his free time with them, and for them. He has added a possible three semesters on to his college education in order to perform his duties as director of youth ministry for the St. Joseph parish. He is hoping to retain his position at the St. Joseph parish for a few more years, implementing a few changes “to create continuity in the youth programs.” From there he’ll wait and see where the future will take him.

“I’m not a miracle worker,” Feeney said. “I’m bringing some radicalism, some new energy into the parish—sparking something that’s already there.”