Note: The following letter was written by Father Allen Tarlton, a monk at St. John’s Abbey in Collegeville, MN. The letter was sent to the members of the Abbey’s Oblate Program. Included with the letter from Tarlton was a letter of support from Abbot John Klassen. Abbot Klassen knew, when he wrote his letter, that Father Tarlton had more than the one victim (read victim’s statement). In fact, at the time this letter was written, Tarlton was known to have had acted inappropriately with at least six University and Prep School students. That number is now over a dozen. The Abbey has settled complaints with several of Tarlton’s victims.

In 1992, It was widely reported in the media that several monks of Saint John’s, including me were guilty of sexual abuse. The charge against me was true. On one occasion ten years previously I had been sexually involved with a student in one of my English classes. When Abbot Jerome Theisen learned of the allegation he immediately removed me from the faculty of Saint John’s Prep School and restricted me to the Abbey. A civil suit was brought against me by the student; however, the case was dismissed because the statute of limitation had expired. The student never accepted my apology.

Following the dismissal of the case, I entered St. Luke’s Institute in Silver Spring, Maryland, as an in-patient for six months and as an out-patient for five years. The aftercare program required my returning to the Institute twice a year for three years, each time remaining for a week. Then I returned once a year for two years, again each time for a week. The program also required that I have a support team of at least five persons, and I have met with them approximately once a month for the last several years. My team is comprised of a married couple and three monks. I also see a therapist once every four to six weeks, and attend a Twelve-Step meeting about once a week; sometimes more frequently. I am not allowed to do ministry in a parish or school setting. On campus I am restricted from going to our Prep School, the college residence halls, the athletic facilities and the student dining room unless I have a guest. Although I am the assistant Guest Master, l have recently been asked not to conduct tours of the campus for children or teenagers. 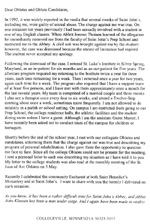 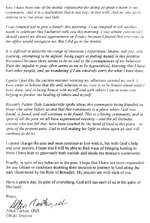 Shortly before the end of the school year, I met with our collegiate Oblates and candidates, informing them that the charge against me was true and describing my program of personal rehabilitation. I also gave them the opportunity to question me face to face. Since all the college Oblates could not be present for the meeting, I sent a personal letter to each one describing my situation as I have told it to you. My letter to the college students was also read at the monthly meeting of the St. Joan of Arc Oblates on 5 May.

Recently I celebrated the community Eucharist at both Saint Benedict’s Monastery and at Saint John’s. I want to share with you the homily I delivered on each occasion:

As you know, it has been a rather difficult time for Saint John’s Abbey, and Abbot John Klassen has been a man under siege. And I again have been made to realize how I have been one of the monks responsible for doing so great a harm to my community. And it is a realization that is not easy to live with. And my one facile defense is to run away and hide.

I was tempted not to give a homily this morning. I was tempted to ask another monk to celebrate this Eucharist with you this morning. i was almost convinced I should cancel my dental appointment on Friday because I feared that everyone in the office would recognize me. But I did go to the dentist.

It is difficult to describe the range of emotions I experience. Shame, self-pity, self-loathing, attempting to be defiant, being angry at putting myself in this position, frustrated because there seems to be no end to the consequences of my behavior. Even the impulse to pray often seems to be hypocritical, knowing that I have hurt other people, and yet wondering if I am sincerely sorry for what I have done.

I guess I feel like the ancient mariner wearing my albatross around my neck. I have come to believe that the only solution in my case is to be honest about what I have done, and in being honest with myself and with others I am in some way helping to further the healing of others and myself.

Recently Father Dale Launderville spoke about this community being founded on those who came before us and that this community is a place where God was found, is found, and will continue to be found. This is a loving community, and in spite of all the pain we all have experienced recently – and the all includes anyone who has felt they have been touched by the hand of God in this place – in spite of the present pain, God is still making his light to shine upon us and will continue to do so.

I cannot change the past and must continue to live with it, but with God’s help and your prayers, I hope that I will be able to find ways of bringing healing to those I have hurt so grievously both outside and inside my monastic community.

Finally, in spite of my behavior in the past, I hope that I have not been responsible for any Oblate or candidate doubting their decision to journey to God along the path illuminated by the Rule of Benedict. My prayers are with each of you.

Have a gentle day. In spite of everything, God still has each of us in the palm of His hand.