St. John’s monk Fr. Finian McDonald is currently “on restriction” at St. John’s Abbey. Restricted monks cannot have personal web sites. Abbot John Klassen, however, is known for his relaxed approach to the enforcement of the actual restrictions placed on monks at the Abbey.

McDonald was placed on restriction after allegations emerged that had at least one victim. Fr. Finian McDonald has at least three victims. The first instance of known abuse occurred in the mid-1970’s. The last, involving a naked massage and (denied) request to fondle the victim occurred in the 1980’s. According to a former monk who spoke with McDonald, McDonald admitted to being a sex addict who couldn’t control himself. 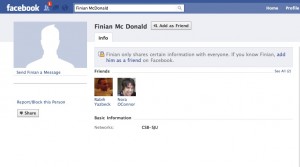