Br. Paul Richards, sub-prior and spokesperson for Saint John’s Abbey in Collegeville, Minnesota recently commented [ View ] on allegations of misconduct by Fr. Francisco Schulte after a lawsuit was filed against Fr. Schulte in Puerto Rico on Monday, alleging abuse at San Antonio Abad school in Humacao, Puerto Rico. “We do not tolerate sexual misconduct in any form,” said Richards.

Br. Paul Richards is no stranger to Humacao, Puerto Rico or to Fr. Francisco Schulte.

Richards served on the faculty at San Antonio Abad during the 1976-1977 school year. 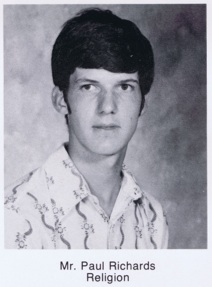 At least four of Schulte’s victims attended San Antonio Abad. In all, nine separate allegations of misconduct have been made against Fr. Schulte.

In addition, Fr. Schulte was aware of misconduct, but failed to report, misconduct by Fr. Dunstan Moorse when Schulte and Moorse were faculty members at St. John’s Preparatory School in the early 1980’s.

What did Richards know, and what has he done to protect potential victims and reach out to existing victims? There is no evidence that he has done either.

Incredibly, Br. Richards has served on the same faculty as many alleged and known perpetrators and pedophiles:

While not impossible, it is unlikely that as a staff member at San Antonio Abad or St. John’s Preparatory — or as member of the Saint John’s Abbey community — Br. Richards has reported every suspicion of sexual misconduct.

“We do not tolerate sexual misconduct in any form,” said Br. Paul Richards.

Those are just words.

New perpetrators will be named.  The names will not be a surprise to Br. Paul Richards or anyone else at Saint John’s Abbey.

It is time for potential leaders like Br. Paul Richards to act, unlike Abbot John Klassen, in the long-term interests of the entire Saint John’s community. Disclose the names of all perpetrators and treat the victims, and those who fight on their behalf, with respect.

In other words, walk the walk.