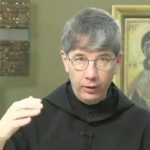 While Father Ruff’s psalm has received some attention (Saint Cloud Times,  Saint Cloud Diocese, Catholic Herald), credible allegations of sexual misconduct against Father Ruff have yet to be publicly acknowledged by the leadership at Saint John’s Abbey.

Father Anthony Ruff was credibly accused of not only sexual misconduct but also of retaliation against his victim, another monk from Saint John’s Abbey.

The misconduct reportedly took place during the summer of 2000.  The monk later left the monastery.

Despite an internal memo from John Klassen referencing Anthony Ruff’s subsequent eighteen month stay at Saint Luke Institute [ View as PDF, Page 6 ], Abbot John Klassen has yet to comment publicly about Father Ruff’s misconduct or his treatment at Saint Luke. The abbot’s silence is likely due to the abbey’s decision to not recognize sexual abuse and other credible allegations of misconduct against non-minors. [ Link ]

In May of 2015, this web site reported that, “Father Anthony Ruff remains on the staff at St. John’s University despite credible allegations of sexual misconduct and retaliation.”

“Father Anthony Ruff remains on the staff at St. John’s University despite credible allegations of sexual misconduct and retaliation, after which he was sent to the Saint Luke Institute in Maryland for more than one year. Father Anthony Ruff also remains involved with the National Catholic Youth Choir.” – [ Link ]

Last week, it was announced that Pope Francis will use psalm by St. John’s monk Father Anthony Ruff. According to the Saint Cloud Times [ Link ], “the psalm will be used in the Pope’s service for U.S. bishops on Wednesday at St. Matthew’s Cathedral.”

“I’m extremely excited that the Pope will sing my music and all the bishops will see my name in the program.”

We respectfully request that monk-perpetrator Father Anthony Ruff’s name not be included in the program and have reached out to the Cathedral regarding this issue.