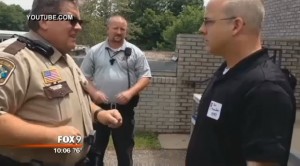 COLLEGEVILLE, Minn. (KMSP) – It’s the season for class reunions — a time to catch up with old friends and remember nostalgic moments, but one Minnesota man was kicked out by his school after decades of advocacy for child sex abuse victims.

On Wednesday, St. John’s Prep alum Patrick Marker, who spent the last 20 years exposing pedophiles, told FOX 9 News he was unreasonably kicked out of his reunion.

Marker is a well-known advocate for victims of child sex abuse and he runs Behind the Pine Curtain, a website dedicated to exposing clergy members who are pedophiles — an effort born out of his own experience.

Marker claims he was sexually abused by a monk at St. John’s Prep in 1983. Six years later, he broke his silence. A lawsuit was filed in 1991, and the allegations were denied. In 1992, a settlement between Marker and St. John’s Abbey was reached.

Over the past two decades, Marker’s other trips to campus had been related to his victim’s advocate work; however, Marker told FOX 9 he didn’t attend his 30-year class reunion to continue that work. Rather, he was there because he was personally invited to enjoy the event.

“I wanted the weekend to be about classmates, about the good parts of St. John’s,” Marker said.

Yet, Marker never suspected attending his reunion would result in so much humiliation. During the event on Saturday, Marker found himself being confronted by campus security and Stearns County sheriff’s deputies.

In cell phone video captured by Marker’s friends, a deputy told Marker, “This actually doesn’t mean anything at this point.”

To Marker’s surprise, his invite was void. Video shows Marker being escorted off his alma mater’s campus. While it’s unclear exactly what happened before the video recording, Marker says he wasn’t there to talk sex abuse.

“It didn’t come up at the party,” Marker insisted.

Marker told FOX 9 News he attended a class at 10:45 a.m. at the reunion, and later found it ironic.

“Boy, during that Benedictine class, it was stressed that you should let go of the past,” Marker recalled.

Afterward, Marker said he was simply enjoying a lunch he paid $20 for before he was told to leave. When he inquired about getting his money back, the officer responded, “As far as the fee you’ve paid, you’ll have to take that up with the group.”

The police report indicates Marker was asked to leave repeatedly. Marker hesitated. After all, he’d been invited to the shindig. The sheriff’s report states Marker was “uncooperative but not abusive.”

Video footage also shows a man in a red T-shirt approach and introduce himself as a representative for the prep school. He informed Marker that St. John’s has a restraining order against him, and said the school had sent a letter asking him not to show up to the reunion.

“They lied to the Sheriff’s Department,” Marker said. “That’s how far they go. They’re willing to lie to law enforcement to embarrass me.”

FOX 9 confirmed that no restraining order against the advocate exists through the Stearns County District Court.

Now, Marker just wants to move forward while he continues to fight for justice.

When contacted for comment, St. John’s Director of Communications issued a two-line statement:

“St. John’s Prep responded to a history of hostility in asking an alumnus to leave our private event. We felt it was in the best interests of our guests to ask this person to leave so that others could enjoy the reunion.”

There are no other police reports on file proving this alleged “history of hostility.”