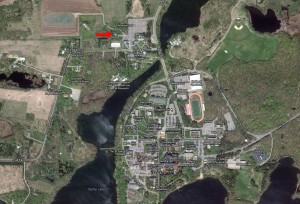 Other faculty members, including John Gagliardi, also lived in Flynntown. 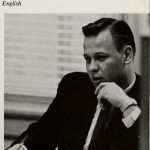 During the 1965-1966 school year, Julkowski was faculty advisor for the Sagatagan, SJU’s yearbook. Julkowski had taken over for Father Hugh Witzman, who held the position for only one year. To the left is a photo of Julkowski from the 1966 SJU yearbook. He is listed as an English professor.

When and why Roger Julkowski left Collegeville in the mid-1960s is still unknown. According to one of the students who worked on the yearbook in 1966, Julkowski “left abruptly”. Julkowski lived within walking distance to his job as an English professor and yearbook advisor. Why would he leave? Here is the most plausible explanation: In a conversation with two of his former football players on July 23, 2012, Saint John’s football coach John Gagliardi shared details [ View ] regarding an incident of sexual misconduct that he remembered having occurred in the 1950’s.

The 85-year-old football coach recalled showing a recruit from Florida around campus when another faculty member known to Gagliardi offered to complete the tour. The next morning, Gagliardi found the recruit on his garage floor. The young man told Gagliardi what the faculty member did the night before.

According to John Gagliardi’s account, he reported the incident to Father Dunstan Tucker, Dean of Students at Saint John’s. The lay faculty member, according to Gagliardi, was fired immediately.

Father Dunstan Tucker was Dean of Students from 1958 until 1967.

Gagliardi told his two former players that the lay faculty member went on to teach at Cretin High School.

In the late 1960s, both institutions were primarily staffed by religious: Saint John’s by the Benedictines, Cretin by the Christian Brothers.

A review of yearbooks, campus directories and phone conversations with former faculty members of both institutions provided no other matches.

In the fall of 1967, Roger Julkowski reportedly showed up as a teacher at De La Salle High School in Minneapolis. A student remembered Julkowski from De La Salle — and trips to Julkowski’s home in Flynntown:

“[My friend] and I first met in High School about 1967. We were both interested in theater and were favorites of the drama coach Roger Julkowski. We spent many a time together up in “the Loft” above the stage or at a some party or other event at “The Farm” in Collegeville.” [ More ]

In the Fall of 1968, SJU and CSB students participated an “educational experiment” whereby five college women lived at Roger Julkowski’s house in Flynntown. As part of the same experiment, ten men lived in a trailer on the property. According to one of the men, it didn’t take long for the men to abandon the trailer and move into the house. The experiment was mentioned in the September 6, 1968 SJU Record:

“As a matter of fact, 15 of us are living here at Roger Julkowski’s place and participating in a thing called the Community Education Project.”

This “Community Education Project” was known to the students as “The Farm”… an experiment that received its share of bad publicity. It is unclear if Roger Julkowski’s participated in the “The Farm” project or whether he returned home on the weekends (as he often did in the 1970’s). By March of 1969, however, Julkowski wanted his house back. Regardless, Julkowski’s home would thereafter be referred to as “The Farm.” According to the March 21, 1969 SJU Record:

“they’re not going to keep ’em down on the Farm anymore, for the owner of the property, Roger Julkowski, wants his house back.” 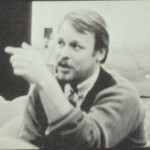 In the fall of 1971, Roger Julkowski joined the staff at Dekalb High School in Dekalb, Illinois. According to a former student, Julkowski appeared on the front page of the local newspaper during the summer of 1972 after he was arrested for urinating in public and did not return to Dekalb. The former student also reported that Julkowski’s landlord walked in on Julkowski (in his underwear) and one of his students.

In the fall of 1972, Roger Julkowski joined the staff at Cretin High School in Saint Paul (MN). Seven years later, in 1979 [ View Photo], Julkowski was teaching Composition, Advanced Writing and Film Study. He was also the chairman of Cretin’s English Department and the school’s theater director. A former colleague at Cretin remembers that Julkowski had a place in the Twin Cities but often went home to Flynntown on the weekends. In 1981, Julkowski was forced to leave Cretin. According to a former SJU student (and friend of Julkowski) Julkowski claimed that a “misunderstanding” with a student led to his dismissal from Cretin.

One of Roger Julkowski’s roommates during the 1981-1982 school year, then a student at SJU, said that Roger was sad and drank the year away. Julkowski told this student that something had happened at Cretin and that he couldn’t return, but refused to offer details.  The student said that Julkowski was “enormously alcoholic” and had “serious health issues” that year. In approximately 1982, Julkowski entered alcohol treatment. A family member said that Julkowski tried treatment and spiritual retreats to rid himself of his demons. A card found after his death revealed Julkowski’s awareness and sense of humor According to a family member, it read something like, “Dear God, please forgive me for the mistakes I have made. I will forgive you for the joke you played on me.” While at “The Farm” Julkowski lived on the first floor. His roommates lived upstairs. According to a student during the 1981-1982 school year, Saint John’s Abbey monk Father Finian McDonald [ More ] was a regular visitor to the house. Another visitor, a friend to another of the students who lived with Julkowski provided this memory:

“The night [Julkowski] “hit” on me, I was there with the people I have mentioned, and Roger walked me to the end of his driveway. He then threw his arms around me in what I thought was a friendly hug…when he was more or less refusing to let go, I had to push myself away and let him know this was not my scene, and he stood there in the moonlight smiling one of the saddest smiles I have ever witnessed.  [My friend] is right, he was one of the most miserable son of a bitches I have ever encountered.”

Campus Ministry / VISTO In 1982 or 1983, Roger Julkowski returned to work in Collegeville, Minnesota. He worked in the mail room at the Liturgical Press, shared an office in the campus ministry office with Father Nicholas Doub, ran the VISTO (Volunteers In Service To Others) program, and was an occasional eucharistic minister at the both the upper and lower abbey churches, the same churches frequented on Sundays by the Gagliardi family. The brother of a former SJU student provided the following account regarding Julkowski’s via email in 2007.

During the summer of 1984 [Victim] was visiting campus for the day to do some studying of native plants when he ran into Julkowski. It was getting later in the day and Julkowski invited [Victim] to stay with him in Flynntown instead of driving back to his hometown, 60 miles away. [Victim] was a very trusting and a down to earth person and would have never thought twice about accepting this invitation.

After dinner, they talked awhile and Julkowski showed him up to the room he would stay in. [Victim] went to bed and a short time later he thought that the guy’s dog had crawled into bed with him until he got closer. At that point [Victim] jumped out of bed, turned on the light and asked him what the hell he was doing. Then [Victim] saw the jar of Vaseline and realized what Julkowski’s intentions were. [Victim] grabbed his stuff and got out of there as fast as he could.

According to the April 18, 1986 SJU Record, the VISTO program at CSB/SJU had over 850 members. On at least one occasion, Julkowski was reprimanded for loaning out the VISTO vehicle to students who used it for non-VISTO purposes.

Roger Julkowski also had access to young men though his involvement with the Central Minnesota Together Encountering Christ (CM TEC) program. According to the TEC web site:

“TEC is a three-day retreat weekend based on the Paschal Mystery: the death and resurrection of Jesus Christ. Our TEC Center is located just outside of Little Falls in central Minnesota.”

Julkowski was introduced to the TEC program in 1986 by a SJU student who thought he would be a good mentor. In an email provided to this web site over four years ago, a former TEC participant remembered Julkowski this way:

“I know he is long since passed away but at least there is some sort of recognition of his ongoing crimes in the 80’s. I was one of his conquests in the 80’s during a TECH retreat in Belle Plain. Confused and stupid at the time he pursued me for nearly a year sending me “letters” that were very confusing to me and physically pushing him on me. I would like to say it wasn’t a big deal but the confusion (as its the best way to describe) is still quite lasting now in my 40’s.” [ View ]

Roger Julkowski’s house had always been an attraction to (or attractant for) young men. A former student remembers:

“I remember the trailer out front on jacks (so it wouldn’t slide downhill). There were a couple of such things over the years. The Farm was next door to a liberal college campus in the 1960’s and 1970’s. Good gods, we were all a little weird back then. Some of my high school buddies lived in the barn at one point “getting in touch with nature ” for a year or more.  That was one of Roger’s strengths as a teacher. He never tried to stifle creativity nor impose unreasonable standards. Want to try the commune lifestyle, OK., the barns available just don’t damage anything and keep him informed as owner of property.”

“It was well known that Roger was “gay” and he may have had a relationship with several students and faculty at SJU/CSB.”

The student distanced himself from Roger Julkowski, and by late 1989, had moved several states away. In a recent phone conversation, the student, now in his late 40s with strong ties to the Catholic Church, recalled a dream that he had on the evening of October 22, 1989.  In the dream, Roger Julkowski abducted a young boy and did something with the body in West Gemini Lake, the lake behind Julkowski’s home. On the morning of October 23, 1989, the former student heard the news that Jacob Wetterling had been abducted in Saint Joseph, Minnesota, a few miles from Julkowski’s home.

On March 30, 1993, Roger Julkowski died at his home in Flynntown. His death certificate says that he died of natural causes at the age of 54, with the “immediate causes” listed as hypertension and alcoholism. A week before he died, Julkowski called a family member to say goodbye. The family member said that Julkowski had become despondent in the weeks leading to his death and simply stopped taking his medication. According to another family member, there was no alcohol in the house when Julkowski died. Rumors persisted for years that Julkowski had been diagnosed with AIDS and others heard that he hung himself. Family members are adamant that a ruptured aneurysm took Roger Julkowski’s life. According to a family member, Julkowski didn’t show up for work at the Liturgical Press one morning. Saint John’s Life Safety personnel reportedly went into his house and found Julkowski on the floor (according to one family member) or one his bed (according to another). In both cases, Julkowski’s dog was by his side. The family sold Julkowski’s house and gave way or burned most of his belongings.

Getting Help If you have knowledge of misconduct by Roger Julkowski or any other personnel at Saint John’s, please contact law enforcement, a therapist or an attorney. Also feel free to contact the webmaster [ Go ] .