Video of Confrontation in the Bahamas

In late December of 2011, [Victim] met with Archbishop Patrick Pinder in the conference room in the chancery at St. Francis Cathedral in Nassau, Bahamas. The meeting was close to an hour in length. [Victim] asked that Pinder bring Father Mel Taylor in for a meeting so that [Victim] could confront Taylor regarding sexual advances, exposures and other inappropriateness perpetrated by Taylor when [Victim] was a novice monk in the early 1990s. [Victim] simply wanted to put the issue to rest.

Pinder refused to set up that meeting. According to [Victim], Pinder told [Victim] that he would have to deal with the issue. 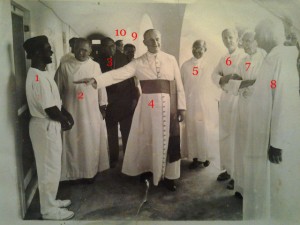 This 1992 photo shows [Victim] (left) and Mel Taylor (second from left) in the Bahamas.

When [Victim] found out that Taylor would be celebrating his final mass on June 3rd, he decided to deal with the issue.