There are several stories here:

2. Br. Jim Phillips’ name has never been made public despite having two claims of sexual abuse settled in 2002 and despite the results of an (Abbey commissioned) investigation in 2004, which showed that it was “highly probable that the sexual abuse occurred”.

4. Despite living “under supervision”, Br. Jim Phillips travels (unsupervised) away from St. John’s on a regular basis to be close to two separate families. Members of both families have expressed a concern about Br. Phillips’ interaction with their children.

5. Three people contacted Abbot John Klassen about Br. Jim Phillips’ inappropriate relationship with one woman – and his activities with her grandchildren. The Abbot broke the confidence of one person, naming her in a letter to Br. Phillips.

6. Instead of telling Br. Jim Phillips to stop seeing the woman, Abbot John Klassen recommended that he “scale back” the relationship and required that he bring another monk to future meetings. Further, the Abbot warned Br. Phillips that family members are monitoring his correspondence.

7. In 2002, with regard to restricted/supervised monks, the Abbot said “When they are here, they are in our community and the public doesn’t have to worry about what’s happening in the larger community.”

8. Br. Jim Phillips is the fifth monk (along with Fr. Bik, Fr. Wollmering, Fr. Blumeyer, and Fr. Schulte) to have his name made public long after the Abbey knew about credible allegations of misconduct. At least four other monks/employees have had claims settled, none have had their names made public. At least twenty other monks/employees have been accused of misconduct.

9. In September of 2006, External Review Board Chairperson Kate Lally, in an opinion letter to the St. Cloud Times, stated that, “The board also has been an advocate for creating opportunities for victims to heal, including publicly disclosing names of offending monks.”

Brother James Phillips, was born in Rochester, NY, but grew up in Villard, MN. Brother James professed vows at St. John’s Abbey in Collegeville, MN in 1970. He was sacristan in the abbey church for the next nine years, and again from 1985-89. He worked in the residence halls at St. John’s Prep School and St. John’s University in the 70′s, 80′s and 90′s. From 1981-84 he assisted in the business office at St. Augustine’s Monastery and College in Nassau, Bahamas. During his 25 years of monastic life he has also assisted with care of the elderly in the abbey health center. He is currently a member of the residential staff at Saint John’s Preparatory School.

Since the claims against Phillips were brought forward in 2002, the abbey has made public the names of at least five other monks (See Appendix A). Despite settling the two claims and despite the findings of an independent investigation in 2004, St. John’s Abbey never publicly names Br. Jim Phillips as an offending or restricted monk.

According to a 2007 email from Abbot John Klassen to one of the victims, “The abbey hired an external investigator (Dan Connolly from Faegre and Benson) and ultimately this investigation caused me to conclude that your claims were valid.”

In that same 2007 email, Abbot John Klassen told the victim, “Brother Jim was removed from public ministry immediately at the time your allegation came to our attention in August 2002 and has been at the abbey since that time. At no time since has he had access to minors as part of his work.”

Emailer #2: “I ran into Br. Jim Phillips there. He was with ___ , whom he has been squiring for several years now … they were planning a vacation to Philadelphia recently” and “I am worried about any contact he may have with my brother’s children. Particularly his 12 year old son.”

In May, Br. Jim Phillips was filmed in a park with young children. He is also filmed holding hands and kissing a woman in a parking lot.

1. On May 10 or 11, 2010, someone familiar with the situation contacted Abbot John Klassen. A concern was expressed regarding the amount of time that Br. Jim Phillips was spending with his girlfriend and her grandchildren.

2. On June 6, 2010 Pat Marker discussed the matter with Abbot John Klassen after 10:30 mass. Marker told the Abbot that he recently received an email describing how one of the monks [Br. Jim Phillips] is having a relationship with a woman and how family members are worried about the kids because of the amount of time that Phillips spends with them.

Abbot Klassen responded by writing a letter to Br. Jim Phillips. In the letter, the Abbot not only provided the name of the woman (the last of three people to contact him, in confidence), the Abbot also warns Phillips that his correspondence is being monitored.

Br. Jim Phillips then wrote a letter to Girlfriend #1:

I received a letter from Abbot John Klassen, the main superior of St. John’s Abbey. Quote: “I have a call from [name] who lives in the Twin Cities, regarding [name]. She has expressed strong concern about your (meaning Me) relationship with [name], your visits to her, your cards and letters to her. [name] says that her son gets the “creeps” from you (me) because of your way of relating. I urge you to scale this relationship back and when you visit, to have another monk with you. Be aware that whatever you write to [name] is being monitored by [name].” End of quote. 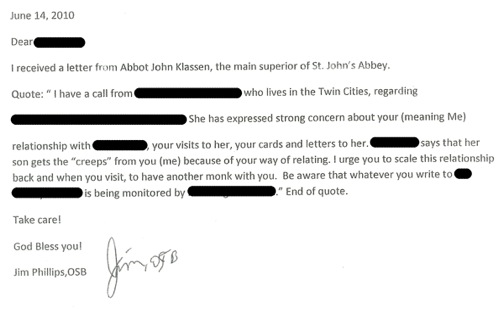 On June 16th, the Abbot left a voice mail for the woman who called regarding Phillips:

“Hi [name], this is Abbot John calling. What I did was, and I am calling in respect to Brother Jim Phillips. What I did in my conversation with Brother Jim was I expressed your concern to him regarding the intrusiveness of his relationship with [name] and I asked him that he not be with her except in the presence of a monk, another monk. I was trying to be sensitive to your concern about his relationship with her. So that’s what I said to him. So I don’t, I hope that I didn’t err and cause undue anxiety or inappropriateness or difficulty for you in what I said, but I did feel it very, very important to respond to your concerns…”

Clearly, either Br. Phillips or Abbot Klassen is lying about how the Abbot communicated his wishes to Phillips.

After the woman threatened to go public with the Abbot’s handling of the matter, the Abbot left three more voice mails on July 14th. He vowed to try to reach the woman and her mother (Jim’s girlfriend).

On July 24th, the Abbot left another voice mail for the woman who called regarding Phillips:

“Hi [name], this is Abbot John Klassen calling from St. John’s and I am returning your calls. I was finally successful in speaking to [name] regarding Br. Jim Phillips. I spoke with her directly about the fact that Br. Jim is living with supervision, that there were two allegations from the 1980’s, early 80s, that we did an investigation, that despite his denial of these events, nevertheless, he was not convincing of his account of events, that he has been living with supervision since that time. I apologized to her for any disruption in the relationship between the two of you. She is a pretty strong woman, as you know, and strong in her conviction of Jim’s innocence in this matter. Clearly they have spoken about it, and she was aware if it, has been aware of it, in their ten year relationship, and she took me to task for the abbey’s role in this. Part of the tension may be simply because very different view of things and clearly did not credit any truth to my saying the reasons for Jim being on supervision…”

According to one source, “Br. Jim Phillips claimed that he and the woman were in love and if he were able to marry anyone, he would marry her.”

The woman and her family have requested that no details be provided.

“St. John’s policy is to investigate all allegations. If an allegation is deemed credible, the accused is required to undergo treatment. When the accused returns to the monastic community, they are allowed to work only in positions where others would not be vulnerable, Klassen said. “When they are here, they are in our community and the public doesn’t have to worry about what’s happening in the larger community.”

According to a former monk:

“Jim was a holier-than-thou, know-more-than-you (except he didn’t) character. He was sacristan, and while he occupied that position he always seemed excessively reverent. He was not an outgoing person, and my recollections of him were of a person who always took things more seriously than they deserved, often correcting others’ statements, as if he had access to information no one else did. This often happened in the recreation room and buffet nights at the refectory. He was neither intelligent nor pleasant, and I never saw him smile. Jim Phillips seemed to have some kind of physical impediment that made him walk slow and slumping; I don’t know whether that was just his way of walking. From a purely subjective and mean point of view, in creepiness Quasimodo couldn’t hold a candle to him.”