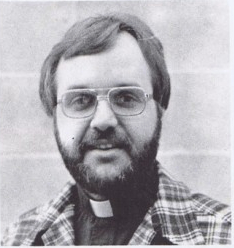 Father Tom Andert, a 1965 graduate of Saint John’s Preparatory School is celebrating his 50th high school reunion this weekend. Andert is acting prior at Saint John’s Abbey in Collegeville, Minnesota.

One of Father Tom Andert’s “alleged” victims, Ben, was a 1995 graduate of Saint John’s Prep School. Much of Father Andert’s history with Ben is well documented. In 2002, Abbot Klassen even offered to pay for Ben’s therapy – an arrangement brokered by another monk perpetrator.

Ben’s class, the class of 1995, is celebrating its 20th class reunion this weekend.

In one of Ben’s last email exchanges with me, Ben referred to the “horrible culture of hypocrisy” at Saint John’s. That hypocrisy will be on full display this weekend.

At 4:30pm on Friday (June 26), Father Tom Andert will say mass for his classmates.

Reunion committee, I respectfully urge you to request that a replacement be found.

Despite being accused of misconduct by at least three former students, his being removed as Prep School headmaster in 1994 due to his relationship with Ben, his spending time at Saint Luke Institute, his having a history of drinking and sophomoric antics — including playing cards in his underwear with college students — Father Tom Andert has yet to be placed on restriction or be publicly named like so many of his monastic brothers. [ View ]

Not only is Andert not on restriction, he is currently prior at the abbey and is reportedly supervising the older monks who are under Safety Plans (for misconduct) at the abbey.

When Abbot John Klassen is away from the abbey, Father Tom Andert is in charge. If something should happen to Abbot Klassen, Father Andert takes over.

To date, no one has stood up and said with regard to Father Tom Andert, “Enough!”

Perhaps that person is among your committee?

[Note: When Father Tom Andert was named prior in 2007, Ben flew to Minnesota in an effort to bring attention to his misconduct and stop the appointment. He was unsuccessful.]

Ben’s story was no different.

[Note: Ben’s mother recently shared that Father Tom Andert used the same “You’re the son I never had” line while at a restaurant in approximately the spring of 1994 with Ben and his mother. Ben’s mother quickly, and firmly, reminded Father Tom that Ben already had a father.]

Ben was no stranger to Saint John’s Prep School when he entered as a sophomore in 1992. Father Tom Andert and Ben’s father were at the Prep School around the same time.

Ben’s first stay at the Prep School was short lived, however. In early September of 1992, Ben called his parents. They were at an Elton John concert. Ben told his parents he was homesick and wanted to come home.

Over the next eighteen months, Andert and Ben spent far too much time together.

According to emails from a former Prep employee:

“Andert fell completely in love with Ben XXXXXX and treated him as an equal–not the juvenile high school student he was.  What a MESS it was for Ben and for Andert!” – September 20, 2007

“[Andert] spoke about [Ben] to me in overly-glowing terms (inappropriately so for a middle-aged man speaking of a teenager) and spent a lot of time with him one on one– going out to dinner, visits in his office, trips to Mpls., etc.” – September 25, 2007

“Abbot Timothy met with me, Thamert and Andert and I was asked to provide my observations about Andert’s inappropriate closeness with Ben XXXXXX.  It was enough information to make the abbot force Tom to fully leave the Prep School.”  – September 30, 2007

And from another Prep employee:

“I saw Andert tear up over Ben XXXXXX in his office around 1994…it wasn’t grief, but serious longing I could see in his eyes…he said, “don’t you sometimes just want to take these kids in your arms and hold them?”  I sat there and blinked, and perhaps agreed in a vague way, as I was truly afraid of him.” – December 22, 2014

Until a few months ago, Ben’s parents didn’t know that Andert had been removed as headmaster due to his “relationship” with Ben – or that Ben’s suicide attempt took place the night before Father Andert’s replacement, Father Mark Thamert, was announced.

Father Tom Andert’s published love letters [ View ] began while Ben was still in the hospital – and as Father Andert was on his way out as headmaster at Saint John’s Preparatory School.

Again, Ben, let me assure you fully + firmly of my unconditional love for you. I want to be the “gas in your tank” so you can be “the driver of your car”. I know that my love and support are very important to you, and you can count on this relationship always. You are a wonderful, caring + loving person, and you are going to make it through this experience. I will never give up on you, and you know that!!  – Father Tom Andert – February 15, 1994

“I know I keep telling you this, but if I ever had a son, I would want him to be just like you! You are a warm, compassionate, caring + just plain wonderful. I sure love you very very much, as if you are my own kid! Crazy, huh? Imagine having a priest for a dad!!! Wow!” – Father Tom Andert – February 24, 1994

Despite being removed as headmaster, Father Tom Andert, from a PR standpoint, remained a star for Saint John’s Abbey:

Fr. Thomas Andert, OSB, who is completing a six-year term as headmaster of Saint John’s Preparatory School, has been selected by the school’s Alumni Association’s board of directors to receive the 1994 Armor of Light Award during a social and dinner celebration at St. Albert’s Parish Hall in Albertville, Minn., on April 23. – Connections (April 21, 1994)

In October of 2005, Father Tom Andert’s relationship with Ben was reported to the Abbey’s External Review Board and brought to the attention of Abbot John Klassen.

In January of 2006, according to the External Review Board minutes:

“Andert Complaint: There was a question by a member of the Board as to what happened with the Andert complaint. The Abbot reported that the victim would not come forward.”  – ERB minutes – Friday, January 20, 2006

Abbot Klassen was lying. By 2006, the Ben/Andert story had been told at least twice.

Ben’s parents reported Andert to Abbot Timothy Kelly in 1996. During those meetings, Ben’s parents were shamed and intimidated.

With regard to the 1996 meetings, Richard Sipe recently wrote to Klassen:

“Ben’s parents are in contact with me currently. They spoke with me already in 1996 about Ben’s abuse and his reactions and struggles with it and the “disrespectful and demeaning” (condescending) way Timothy treated them. They are still hurt and angry about the response of St. John’s.” Richard Sipe – April 3, 2015  [ View ]

Abbot Timothy Kelly, a credibly-accused perpetrator himself [ View ], discounted the accusations against Andert.

Ben wrote about his meetings with Brennan:

“During our “coffee conversations” we covered everything from my experiences at St. John’s and Tom Andert to our very differing views on monasticism/the Catholic Church and celibacy. [Brennan] did share with me that he had been part of an “inappropriate relationship” as well, and 20 years later the victim sought legal action.” Ben – October 21, 2007

“Brennan forwarded your request for funding for counseling. It sounds like you have found the right person to work with, someone whom you trust and is approaching this in a systematic way. The abbey will fund this work. Please send the bills to me directly… ” – Abbot John Klassen, October 25, 2002. 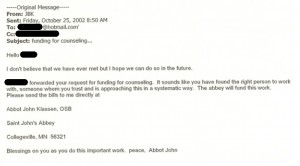 Klassen did not replace Father Tom Andert as faculty resident.

[Note: Two weeks later, on November 9, 2002, SJU student Joshua Guimond disappeared from campus following a visit to Metten Court.] [Note: During a phone call on November 2, 2007, Abbot John Klassen was made aware of yet another of Father Tom Andert’s “alleged” victims, a (then) sixteen-year-old from the mid-1970s. Several details were shared with Abbot John Klassen with the understanding that they would not be made public.]

“Thank you for the opportunity to speak about “my story” with you last night.  It’s an incredibly significant component of who I am, and it is has been a long time coming to share it with you…  Thank you.  This is an important juncture for me to bring meaning to what has been a very difficult period of my life and I hope to ultimately help others avoid such experiences.”

During our conversation, Ben shared Andert’s pursuit, the touching, hugging and kissing which took place for months. Ben shared that Andert changed his grades, pulled him from class, and providing alcohol to Ben, a minor, in Andert’s Prep School office.

Ben shared a bit of what happened on a trip with his parents and Andert in Colorado in the summer of 1994. Ben shared that Andert had convinced his parents that they (Andert and Ben) should share a hotel room. With Ben’s parents in a room nearby, Andert came out of the shower wrapped in nothing but a towel.

Ben shared his horror when Andert took off the towel. Ben didn’t share what happened next. He was too ashamed.

Ben shared, and his parents confirmed, that sometime later that night, Ben made it to his parents’ hotel room and spent the night, terrified, between them.

According to Ben, his family and/or Prep staffers, Father Tom Andert:

I, like many others, believe that Father Tom Andert’s pursuit of Ben, along with Abbot Kelly’s and Abbot Klassen’s failure to hold Father Andert accountable – combined with the abbey’s “horrible culture of hypocrisy” – contributed, if not directly led, to Ben’s suicide.

To date, Abbot John Klassen has refused to take action. Perhaps he will listen to you, the Saint John’s Preparatory School’s Class of ‘65 Reunion Committee.

It is time to shine a light on the horrible darkness that is Father Tom Andert.

Please know that my commitment to the victims of misconduct and abuse by personnel at Saint John’s remains strong – as does my desire to hold those credibly accused accountable. I look forward to celebrating many future reunions with my classmates, the class of 1983, and to someday meet each of you.

Please feel free to contact me if you have any questions.